The Festive 500 is a worldwide challenge put on by Rapha that challenges you to ride 500km in the 8 days between (and including) December 24th and December 31st.

It’s an interesting challenge, as the overall distance is not actually that difficult to achieve if you’re already riding your bike regularly. What makes it a unique challenge is just managing your time doing this against family obligations as well as with any travel plans and (likely) bad weather.

For various reasons, I hadn’t done this before

So despite wanting to do this challenge in at least some capacity for the past several years that I’ve known about this challenge, I’ve actually never done it until this year in 2021. For whatever reason, something always seemed to come up that prevented me from riding the miles that it took.

In 2017 I started off strong with an 80 mile ride up and down the San Diego coastline where I even wrote a fun Christmas Eve poem. I then did another ride to the Mexico border a few days later. But then on my way back up to the Bay Area, I started to feel sick, and had to disband my plans I had to ride with the Rapha group out of the newly established Los Angeles chapter.

In 2018 I was recovering from a knee injury I got while in Girona, Spain using new pedals that had a different Q-factor than my previous ones. The following year in 2019, I was traveling with my girlfriend who had no desire to do the challenge, especially since it was a rainy week down in San Diego. And in 2020, we were both in Tucson, Arizona riding our bikes, but certainly not enough to consider the challenge a real possibility.

How I tackled the challenge this year

With some encouragement from my girlfriend, who was already going to be traveling on her own separately from me for Christmas, I resolved within myself that this was the year to do the challenge. My buddy Josh in Orange County was game for it, too, and as a newly minted Rapha Ride Leader, I felt a certain sense of excitement to represent Bay Area riding down in my original “home turf” of Orange County.

My general plan was to try to stack some early miles on the 24th itself, then to join a Rapha ride on the 26th after spending time with family. I figured a recovery ride could be good the morning of the 27th, after which I would travel home to ride another two days with my girlfriend, since she was returning on the 28th (and had expressed interest in riding with me).

Easy enough, right? Sure. Let’s go with that. Keep reading, my friend.

The rides I did this year 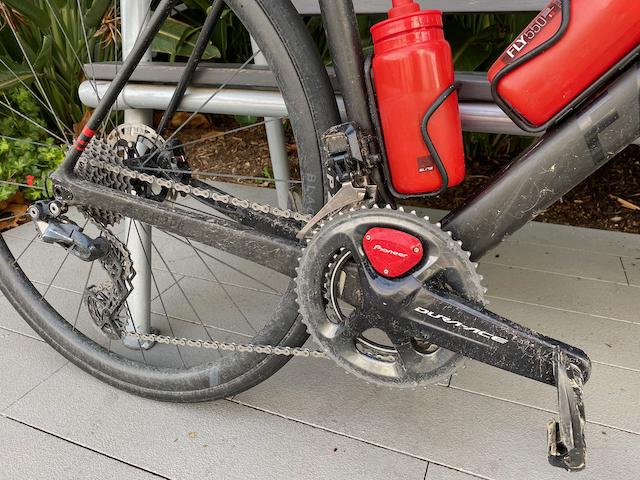 For the uninitiated to the Velominati, you should absolutely check the official “rules” out. They always bring a grin to my face.

Fair-weather riding is a luxury reserved for Sunday afternoons and wide boulevards. Those who ride in foul weather – be it cold, wet, or inordinately hot – are members of a special club of riders who, on the morning of a big ride, pull back the curtain to check the weather and, upon seeing rain falling from the skies, allow a wry smile to spread across their face. This is a rider who loves the work.

Yeah, it was really wet that day. Like, really, really wet. I’m glad I didn’t do this day solo. Having others to commiserate with you can be quite a driving force in accomplishing fun and interesting things! 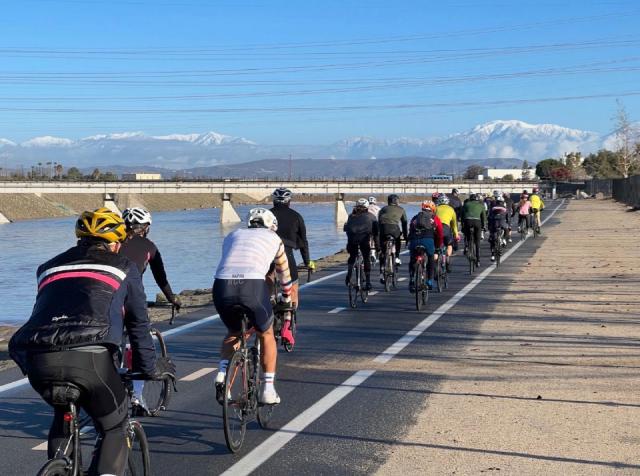 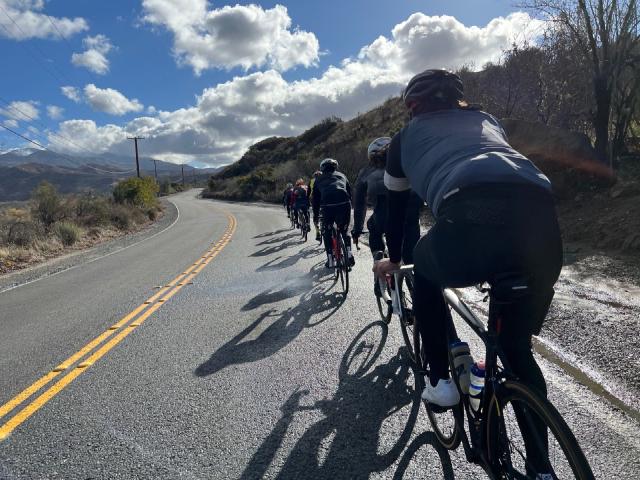 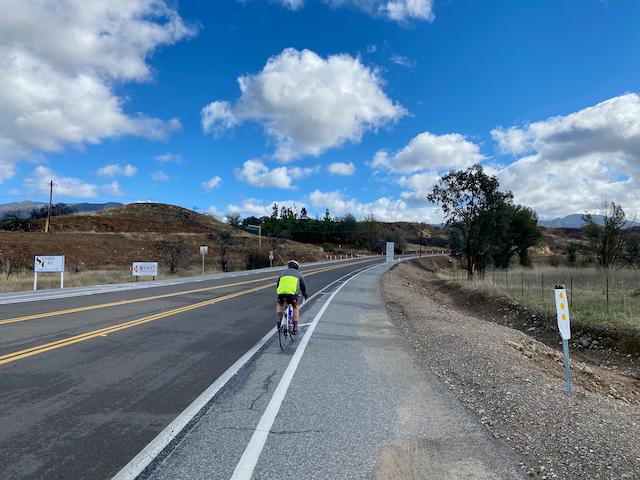 Definitely wasn’t a planned century route that day, but the group was strong, the weather had cleared, and it was an easy way to rack up some extra miles! 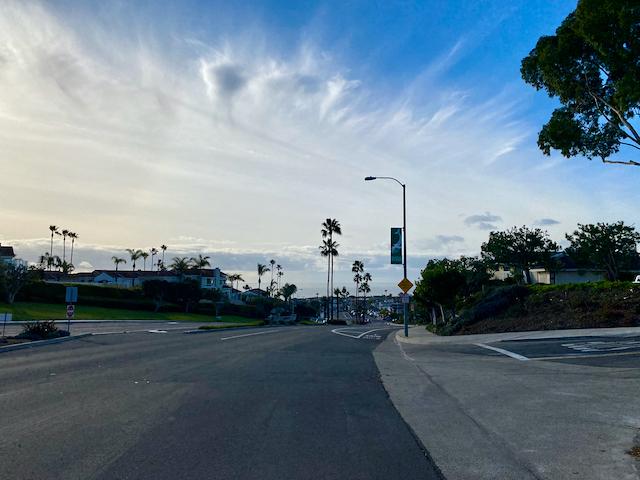 This ride was shockingly cold, actually, getting down to 4 degrees celsius! I was definitely tired, but it made for a great recovery ride, which again, can be almost necessary after a big day in the saddle. I don’t think my drive home later that day would have been very pleasant otherwise! 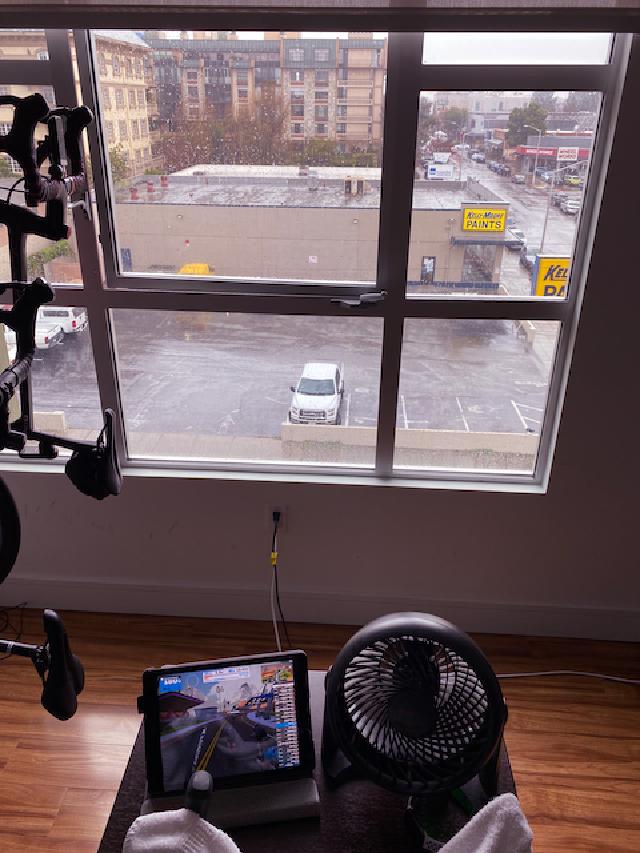 After driving nearly all day to get home, I thought it smart to take a rest day for myself. But then I was welcomed with some more (un)welcomed rain. So I opted to stay inside to add a few extra miles to my week. I also wanted to clean up the bike to get rid of the squeaking that was starting to really drive me crazy.

I think adding some miles here definitely afforded me some more flexibility for the remaining days of the challenge. 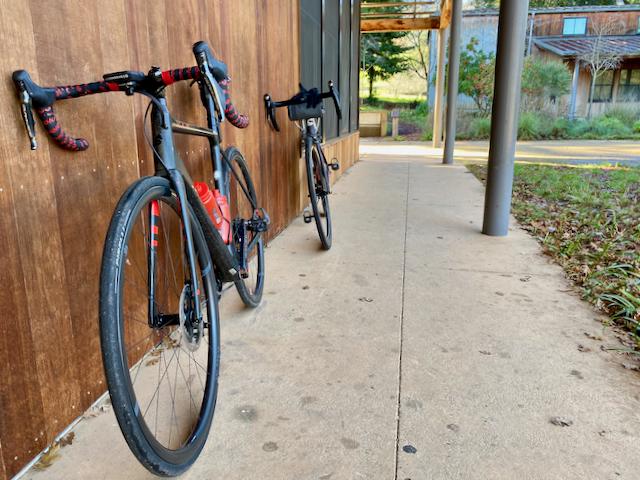 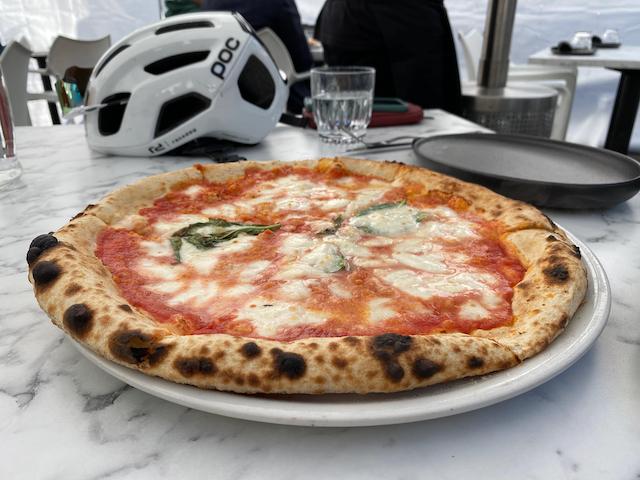 Once my girlfriend had gotten home, she wanted to ride the next two days with me. So we kept this one pretty simple and flat, and ended up trying out Terun pizza for the first time. They sponsor a bike racing team and it’s pretty delicious. Can’t go wrong with carbs at this point in the Festive 500! 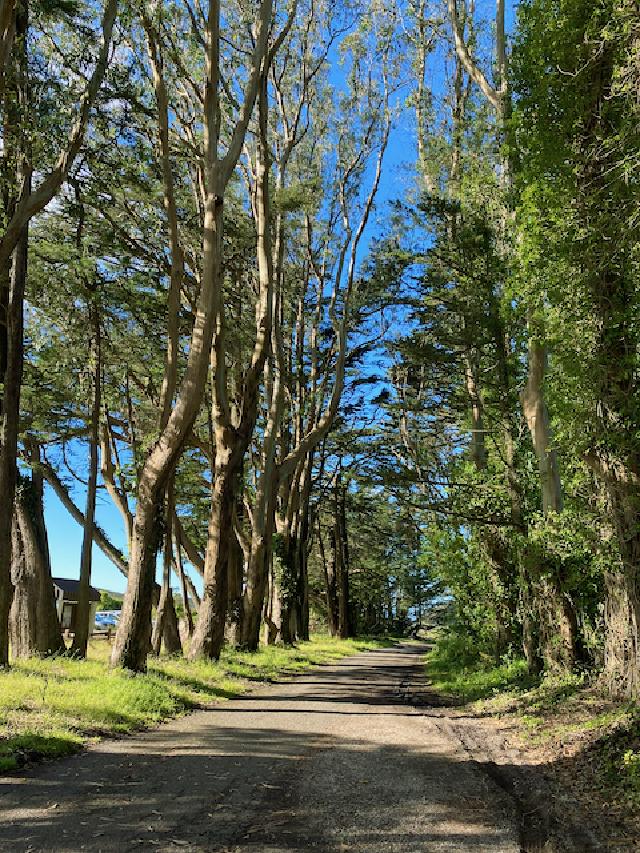 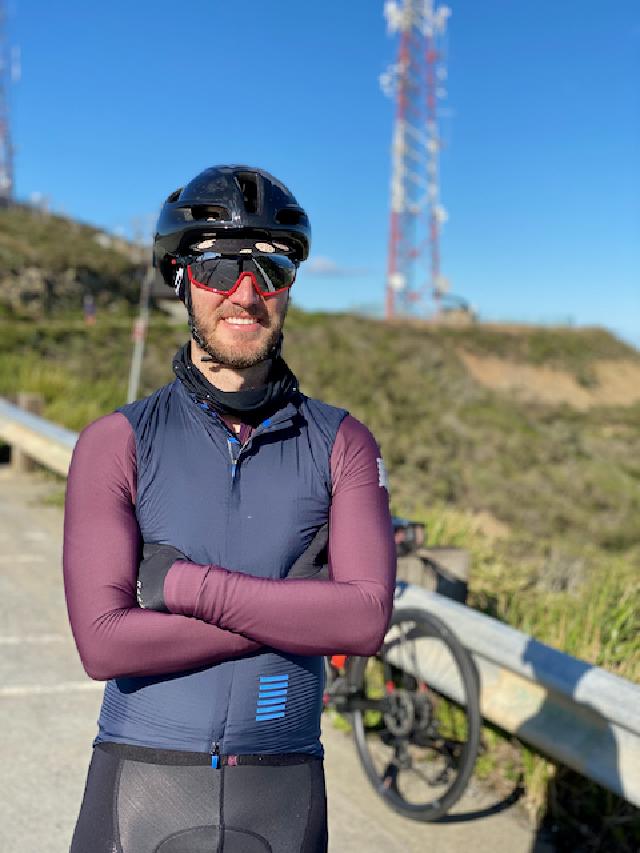 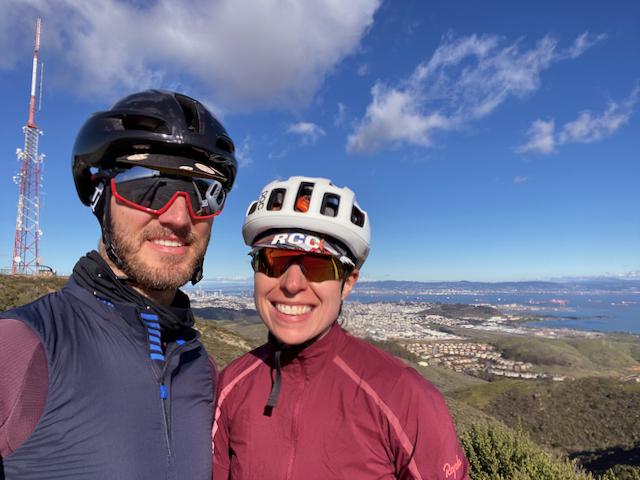 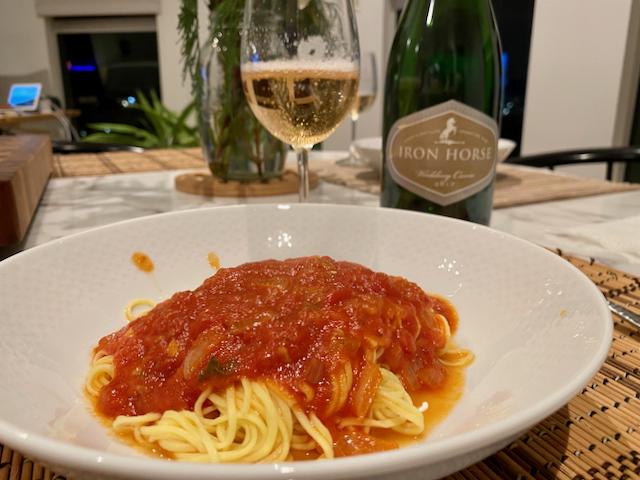 My final day (on New Year’s Eve) included more climbing than was necessary, but it was a route that my girlfriend wanted to do. She was still quite tired from her travels, and luckily for me, I didn’t need too many more miles to finish out the challenge on the final day. The weather was finally clearing up a bit, and it was just way too nice not to go all the way to the top of the radio towers!

We celebrated later that evening with making some homemade pasta noodles and enjoyed it with some bubbly, care of Iron Horse Vineyards. They’re a fantastic winery up near Sebastapol who specialize in putting bubbles into wine!

While I absolutely could have done more distance than what I finally ended up with, I didn’t see any specific reason to do so. I think the spirit of the challenge is enough and at some point, I wanted to let my girlfriend feel included as much as she was able and willing. 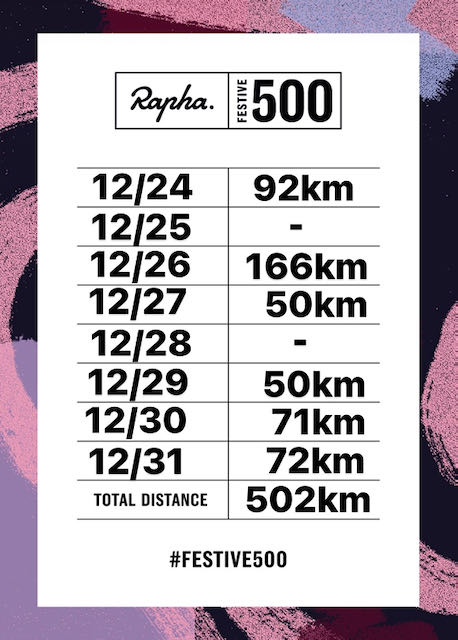 My Tips for doing the Festive 500

Despite not ever having done this challenge before, I had actually read a lot of resources online from others who had. So putting these into practice was not particularly difficult for me, but I still had to put my money where my mouth was and actually follow through on them. They definitely bear repeating here!

This really helped me this year. A lot.

After the first ride’s weather calmed down a bit, and after I had parted ways with both my friends Josh and Brian, I tried to take advantage of the clearing weather and roads. This meant pulling out a map and essentially drawing a larger loop around the city of Irvine before officially heading back to the hotel where I was staying.

This also meant trying really hard to ignore the constant squeaking that was going on with my bike, along with its (suddenly) jumpy chain (I had moved my rear derailleur’s b-screw the day prior, which turned out not to be a good idea).

Similarly, the next morning was forecasted to have better weather (despite the roads still being quite wet), so I opted to ride over to the RCC route’s starting point. Their route was going to take me back past my hotel, so I figured it wouldn’t actually add any extra miles to my overall day.

Except that the group ride was going well by the time we passed my hotel, as was I, so I opted to sit behind the group and let the miles tick by a bit longer. I ended up riding 103 miles that way doing this!

After only two days of riding, I was basically halfway done with the challenge. This gave me a significant amount of breathing room for the remainder of the week!

It may be tempting to find really cool routes that include a bunch of climbing, but if this challenge includes more miles than you’re used to riding in a week, try to stick to the flatter options you have in your area.

Being able to pump out a lot more miles in a shorter amount of time just generally makes the challenge go more quickly. This is especially the case during the holidays, as time is typically the most limiting factor here.

Include virtual rides if the weather is bad

This one kind of goes against the grain of the spirit of the original challenge, but given how things have been the past two years, riding indoors can be a great alternative if the weather outside is not favorable. Or if regulations for travel have been restricted.

Just know that one mile inside on a trainer is, at least in my experience, more difficult than a mile outside. Not being able to coast very efficiently on a turbo trainer, along with simply the lack of mental engagement can make this more difficult.

Try to ride with a group

Going back to the “unexpected” century ride, it was made significantly more easy by being part of a group. First and foremost, this meant that I could draft others, but second, that I could just enjoy being social. This helped me take my mind off of the miles, as a huge part of cycling is mental. If you can find a group to ride with, it’ll help you significantly in accomplishing the Festive 500.

Have a positive mental attitude

This one is something I have a bad habit with regularly falling into. We all get busy with life, and can often get bored with routine (myself particularly), so riding for a bunch of miles while trying to enjoy some time off can be a tricky one. Even more so if the weather is not favorable!

It really strikes at the heart of what makes this such an interesting challenge. Doing the 500km over a week isn’t necessarily difficult to those of us who ride often, but it certainly gets more complicated when other life factors come in and strike at your sense of motivation.

Maintaining a positive mental attitude regularly and consistently can do wonders when attempting the Festive 500. It sounds cliche, I know, but how your mind goes, your body follows.

Quick Shout Out to Jack Thompson

I’ve recently become more familiar with Jack Thompson, aka, JackUltraCyclist, who has been vocal about mental health issues and how he uses riding his bike as a method to cope and manage his mental health. It’s a great message, and one I want to become more aware of myself. Check out his Instagram for more of his content!

Pitfalls I had this year

Living in California, where weather is almost always nice, it feels extremely privileged of me to complain about any pitfalls I had during this year’s Festive 500. They’re still pitfalls nonetheless, which made doing this challenge more difficult than it otherwise would have been.

These were all manageable of course, but they certainly weren’t in my original plan. It certainly made motivation a bigger issue than it otherwise was, given how resolved I was at the onset of this!

I’m glad that I pushed myself to do the Festive 500 this year, and it was so fun to see some of the Orange County RCC crew! I actually haven’t ridden with them previously, as I had moved away prior to them getting their own chapter. Definitely enjoyed getting to know all of them and to develop more skills as a ride leader among a very different crew of riders.

Will I do this again next year? Not sure yet, but I really enjoy mixing up things during this time of year, as it tends to be a great way to reset, relax, and if I ride, eat all the fun holiday foods that I can!