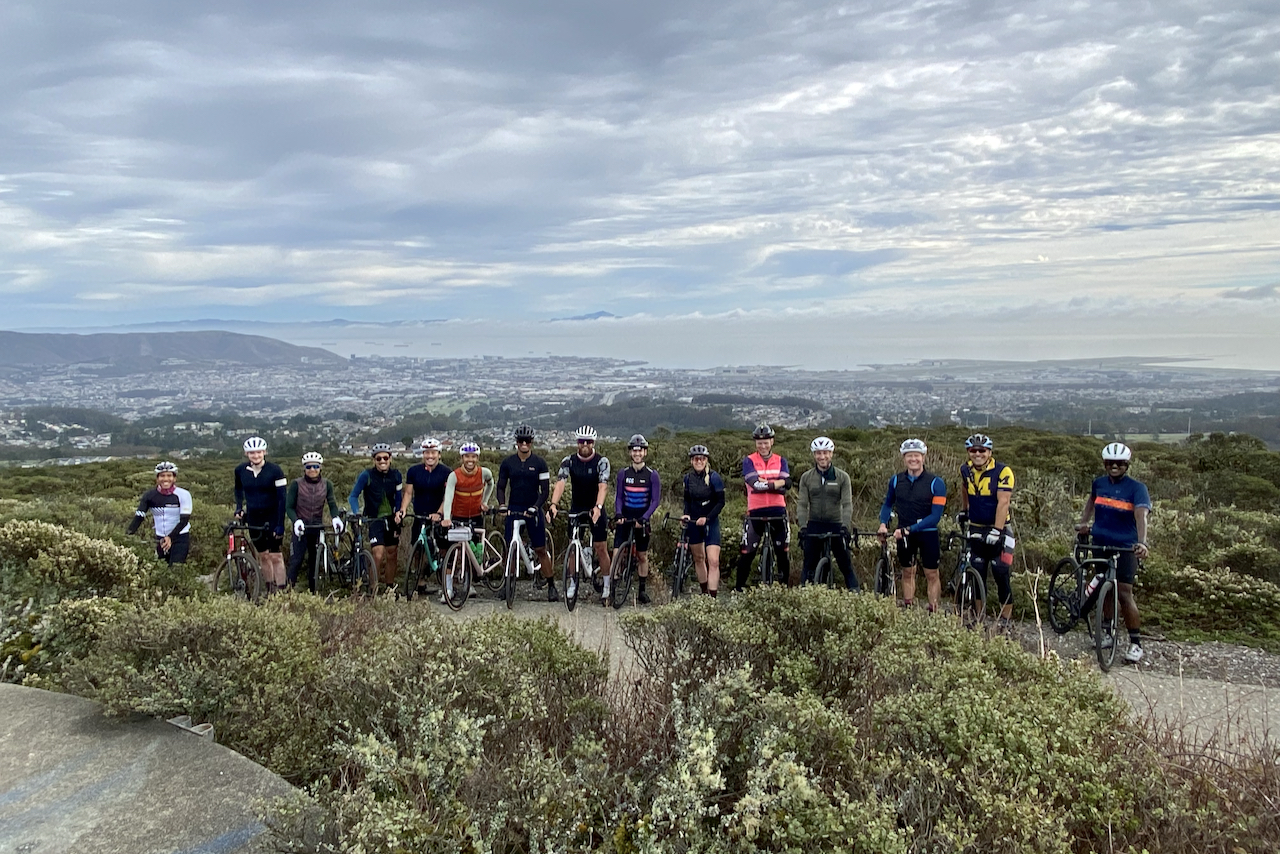 Riding in a Group is what Initially Attracted me to Cycling

I originally started out this blog with telling my story of how I got into riding. Truth be told, a huge component and part of that was the social aspect of riding, particularly in a group. Sure, I loved the drafting effect when moving at speed, but the idea of riding in a group, developing friendships, and becoming a more social human certainly intrigued me. 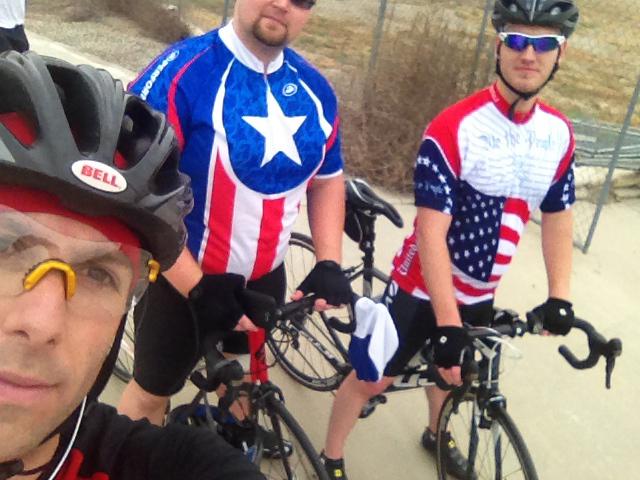 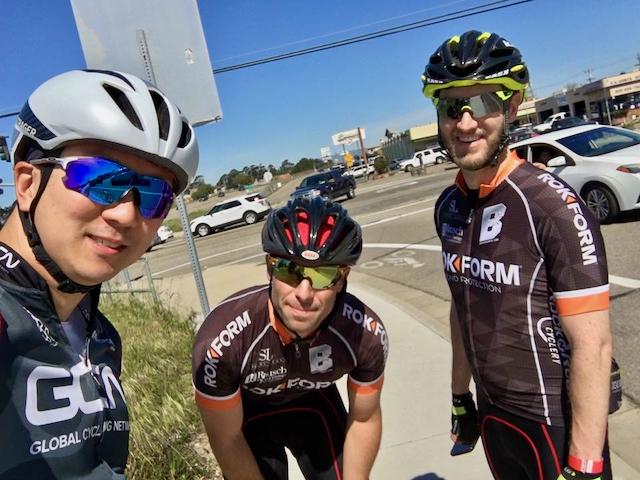 Being part of a community

When it comes to the cycling community, I think it’s more prominent in certain parts of the world more so than others. Areas like San Francisco, London, and places more central to Europe tend to have a lot more of a sense of community when it comes to riding. City planners build out roads with bikes in mind, and a huge chunk of tourism is done in those countries by those who specifically travel there to ride their bike. Having the Tour de France, La Vuelta, and the Giro d’Italia certainly help, too! 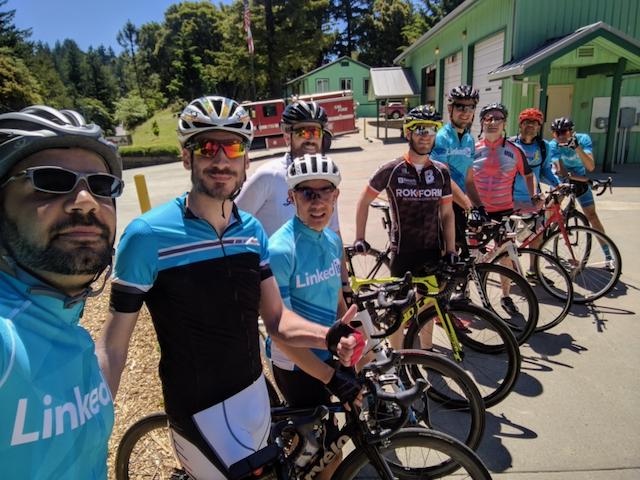 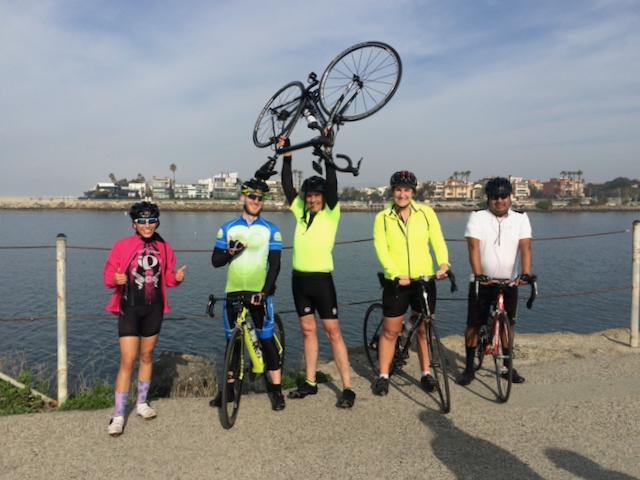 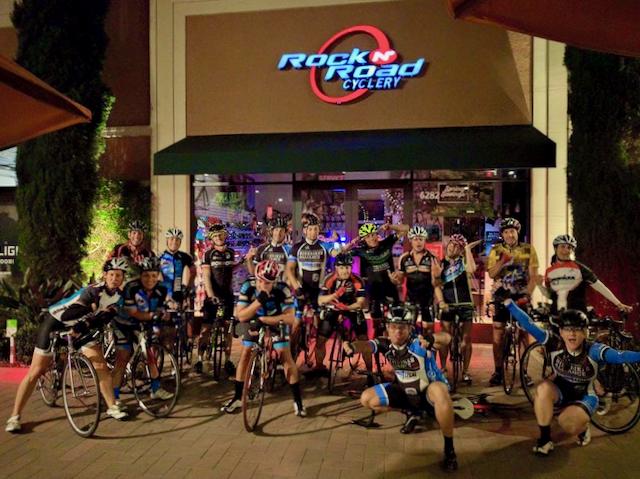 Being a Rapha Ride Leader

For those unfamiliar, Rapha is a worldwide cycling club. They’re most known for their clothing, as they’ve transformed the way cycling clothes are made and, perhaps more importantly, how they’re marketed. Once a member of the Rapha Cycling Club, you can access the app on your phone and find rides from any of the clubhouses anywhere in the world and join them. With a bike hire that they offer, it makes for a unique way to explore the world!

There are a lot of opinions of the brand out there, but they definitely have their place in the world of cycling today. At one point, I shied away from their brand in favor of others like Pas Normal Studios or Maap, but have always enjoyed the sense of community that they manage to consistently bring to the Bay Area.

An area that, for those unaware, is very transitory. Most people joke about how you become a “local” in San Francisco after being here for a whole six months.

Anyways, I’ve been riding with Rapha out of this location in San Francisco for a few years now since moving to the area, and have recently had the opportunity to come on board as a ride leader.

Besides being an ambassador for the brand of sorts (without any obligation to specifically buy or wear their clothing), I mainly organize rides. I come up with routes, I upload the GPX files to an online location, and then attempt to sherpa all kinds of riders while out there on the road. I try my best to keep everyone together and safe, while also trying to be aware of what others are thinking of us while we’re out there hogging the road. 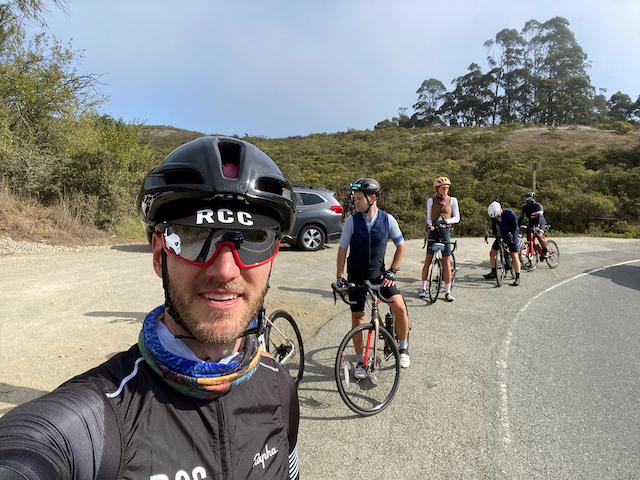 This also means I preview and find new routes in hopes to make for an interesting adventure later with the group. I also imagine what riding in these areas is like with a larger group of riders, planning alternate routes in some cases depending on road closures, traffic, or weather.

My most recent Ride

The ride that prompted this rambling of sorts occurred on November 6th of 2021. It was a tough day out on the bike, as I chose a route that had a lot of climbing. Some of it was quite steep, too! It was actually a route I had done a few weeks prior and nearly everyone I talked to about it seemed very interested.

So I mapped out a route that I knew many local San Francisco riders were not familiar with, found a weekend that was open on the Rapha ride calendar, and set it up with a fun intro. We had about 25 people show up that day!

I particularly like showing locals new routes that are more my routes, as I know there’s a tendency within us all to ride and re-ride the same routes that we are already familiar with. I’ve been here a few years now and have done a lot of riding, so I feel like I have a lot to contribute back to the community.

After getting home from the ride, I posted some thoughts on my Instagram account that I wanted to mention here as well.

As with a lot of things in life, I think it’s important to guide (i.e., not command) others based on your own experiences. I also try to take the opposing side and learn from others' experiences as if they were my own. This doesn’t mean that your experiences are better or worse than others', but we can always learn to share a little more of our lives with those around us. There’s no reason to go out there and demand or dictate unreasonably what you want others to do.

There was a point early on in this ride when we were near the Great American Highway, a large road that has caused no small stir this past year, as it has been (mostly) shut down to cars. So on weekends, you’ll see a bunch of families out there, walkers, runners, and cyclists. The gates on these shut down sections are a bit wonky, as when you enter, you’ll have to enter on the opposite side of the road than what you’re used to. There’s a large median, too, that blocks travel between each side of the road, but there are paths that cross it that allow you to move over to the other side, which, coincidentally, is where the gate on the other side is open.

I was actually further back in the pack at this point and watched as the group took on an identity of its own. There were several there who knew this particular section of road, several who did not, and many of whom likely didn’t have the route loaded into their bike computers and were awaiting instruction. It was a wonderful moment for me to sit back and watch the group share an organic “oneness” in a way. I was leading a group, they were being respectful, and everyone just seemed to genuinely be having a good time, excited for what lay ahead that day.

It’s not always this way though

Recently someone on a group ride had an allergic reaction to a bee sting. On another group ride, the group was split, and without cell reception, it took us a while to reconnect. Sometimes you hear about things that went wrong or feelings that were hurt after the fact.

And that is all okay. People are resilient, they’re social, and they are generally, in my experience, nice to one another when in smaller groups. It harder to be mean to someone to their face, especially when you both share a similar interest.

I enjoy being around it all, helping to share this wonderful love I have for this sport. Especially so with those who are newer to the sport but are no less excited about it.

Sometimes bike rides are treated as a hammer-fest. That’s fine, I love those rides myself, but I think even during a hammer-fest, a sense of being social can still be maintained. When watching pro teams train abroad on YouTube videos, it’s always wonderful to me to see them chatting with each other, sharing in the same goals, and even suffering together. What a great way to bond with other humans! 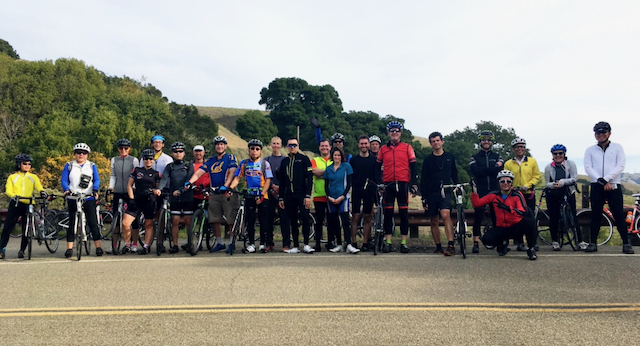 I try especially to move up and back within the pack of riders to check in on people. Sometimes, it’s almost selfish of me, as I can drop way back, then get my workout in to catch up to the front of the pack. I try to say something fun, witty, or just be conversational to everyone I see on my way up.

Of course, this is assuming that I’m actually faster than any of these other riders! That’s not always the case. It’s also a good way to check in people individually, as some may be struggling more than others and I may have to cater some of the group’s riding to their style or their fitness. It can be a delicate balance, one that I think every ride leader has to come up with their own solutions to. 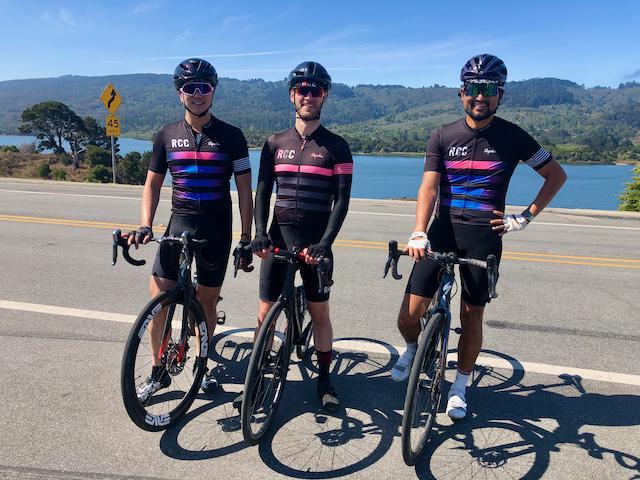 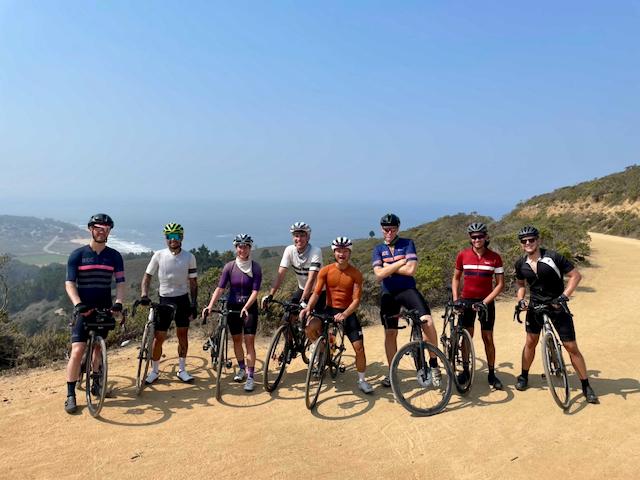 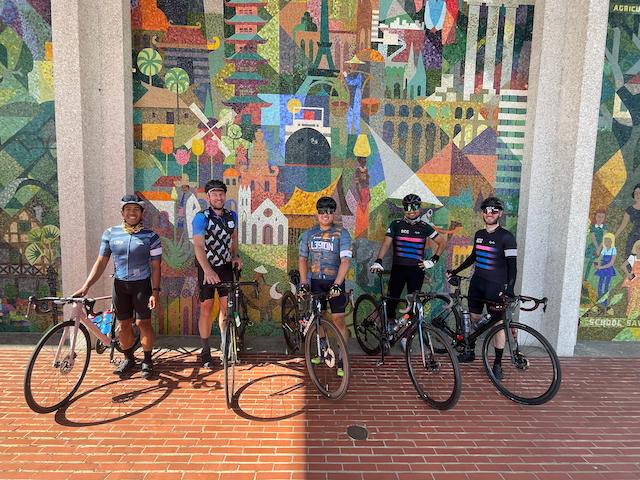 So keep on riding!

Whatever your goals are, just keep with them. It’s all about being consistent! I find it fascinating how a sport can be shared all over the world and that there are clubs that are easily found that can take you on all kinds of adventures.

Apparently those same adventures can also help you find the one you plan to spend the rest of your life with, too! 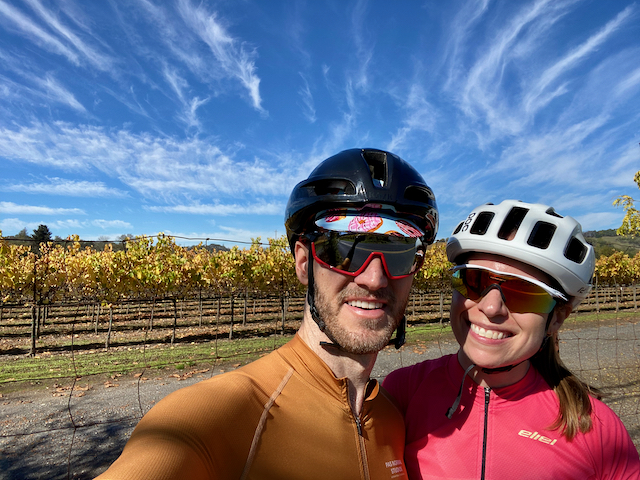 So get out there and ride! If you’re ever in the Bay Area, look me up and we can coordinate something through Rapha for a ride!